How I Photographed the Total Lunar Eclipse of September 2015

Astro, Behind The Scenes, Documentary, How To, Night | 0

Ohh friends, another incredible astronomic adventure. I’ll tell you a little about the work I’ve been doing these past ten days regarding the total lunar eclipse that occurred on the night of September 27, 2015 in Uruguay, and the Americas.

When I first noticed that the eclipse was occurring the same moment a super Moon was (a full moon larger than usual), and that the coincidence was not happening again until 2033, I knew it was a great opportunity to do two things:

One of the first things I do when investigating an astronomic event is to analyze it in Stellarium. With this virtual planetarium, I can forward in time to the day the event happens and see how the sky will look at that precise moment. In this case, it helped me to see the trajectory the Moon was going to travel in the sky, seen from the city I was located, in Colonia del Sacramento, Uruguay.

Virtual simulation of the sky at the maximum of the eclipse. Credits: Stellarium

Once I knew the trajectory, and knowing that the Moon would move from Northeast to Northwest, at about 50 degrees altitude, the next step was choosing a location in the city. I would need a site with the north horizon clear from tall objects – like trees and buildings –, the most natural possible, and far from the city lights. So, with the help of Google Maps, I came to the conclusion that the best place in Colonia del Sacramento was a park called “Parque Ferrando”.

Timelapse of the Eclipse

A timelapse is a way of filming something in which many photographs are taken over a long period of time and are shown quickly in a series so that a slow action (such as the Moon being eclipsed by the Earth’s shadow) appears to happen quickly. For this timelapse, I wanted to catch the variation in the amount of light on the Moon as the eclipse progressed and its effect on the atmosphere and landscape.

For that purpose, I took the location map and traced the starting and ending point of the eclipse with a line, so I knew where to point the camera with accuracy. Making so took a bit of time, but I had to do it perfectly, after all, having the moon out of frame during 4 hours was not an option, at all. In total there were about 660 photographs of 20 seconds exposure each, at f/4.5 and ISO800.

For the timelapse, I used a Canon EOS 60D on a tripod, with a Canon EF-S 10-22mm f/3.5-4.5 USM lens at 10mm, and Magic Lantern installed to program the continuous shots. With regard to the post processing, I edited the pictures in Adobe Photoshop Lightroom and assembled the timelapse in Adobe Premiere Pro. To complete the timelapse, I chose the beautiful piece “Private Reflection” by Kevin MacLeod (incompetech.com), which is licensed under a Creative Commons Attribution 3.0 http://creativecommons.org/licenses/by/3.0/.

This is the final result, hope you enjoy it!

Apart from the timelapse, my goal was to capture 15 pictures of the Moon along the eclipse, in order to show a sequence of the different phases of the eclipse. This sequence was what kept me alert during the five-hour event, because I couldn’t forget to shoot at the right time. To do this, I divided the length of the eclipse in 15 equal time periods, resulting in approximately 20 minutes difference between each photo. Photograph #8 would correspond to the maximum of the eclipse, and photos #7-#9, #6-#10, #5-#11, #4-#12, #3-#13, #2-#14 and #1-#15 would be equivalent to each other in terms of camera settings, because they would be at equal distance from the peak time of the eclipse and in a similar lighting stage. So what I did was to shoot picture #1 and record the exposure time, aperture and ISO settings; those same adjustments would be used for photo #15. Minutes later, I shoot photo #2, noting the settings for use in picture #14. And so on… luckily, I didn’t forget any and managed to shoot the entire sequence.

Schedules and settings for each shot in the sequence.

This is the final result:

In conclusion, photographing an eclipse successfully is not an easy job, it requires study, vision and a lot of preparation. I am excited with the result, as well I hope you are you :) I can also say that besides the learning on how to plan and photograph a lunar eclipse, it was an amazing experience to witness and enjoy it with friends, it made that night even more special.

Thanks to Edin Chavez for inviting me to collaborate with shutyouraperture.com. You can see the original post here. 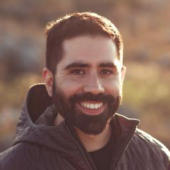 Fefo is a professional photographer and amateur astronomer based in Colonia del Sacramento, Uruguay, known for his landscape photography and astrophotography.