Just as everywhere else in the world, in Macedonia as well, these first two months of the year are the carnival season, as a transition period from the old in the new year … There are smaller carnival traditions in many villages, but three most famous are Prilep and Strumica International Carnivals (happening both during the Ortodox holiday of the Day of Forgivness – Prochka)  and  Vevchani Carnival (happening at the mid January, for the celebration of Julian Ortodox New Year). This time I visited the city of Prilep, city under the towers of king Marko, situated in the very heart of Pelagonia valley, world known by the marble mines and tobacco fields.

The Christian Ortodox holiday Veliki Pokladi (the first week of Easter Lent) is known among the people here as Shrove Sunday or Prochka (Forgiveness Day). It’s movable feast and it’s always celebrated 7 weeks before Easter and always on Sunday.
According to the Ortodox dogmatic the Lent is not only restraining from food, but from everything impure (thoughts, deeds)… so redemption and forgiveness before the feast is very important ritual. It’s a custom on this day, younger people to go and visit older members of family, friends or members of community to ask for forgiveness  for any sins they might have done during the past year.

Every community has different touch on this tradition. In Prilep a specific ritual on the family table is so called “amkanje” ritual, which comes after the visits for forgiveness , at the end of the family lunch. The oldest member of the family will pierce a white boiled egg with a thread and spin it in circles, while all the other members will try to catch it only with their mouth (no arms allowed). The one who catch the egg is believed to have prosper, luck and health in the becoming year.
Also, as a part of pagan custom when the warrior-hunter entering an animal skin was seeking a place in the cosmic order, in Prilep lives the tradition of Mechkari. Starting on Saturday, a group of young and old man dressed up in animal skin (totem) of Bear (in Macedonian language Mechka means a bear) and perform a ritual of scaring and prosecution of demonic creatures as provision for good health and wealth during the upcoming year. They visit shops and houses of the butchers in the community, as most wealthy and important people, as an initiation of forgiveness day.

I was for the first time on this day in Prilep. Although I knew some history on these rituals, I also knew that in the past 15 years this Mechari tradition has grown up into a serious international carnival. So I wasn’t actually sure what to expect… traditional or modern Carnival… and I found a profound amount of joy on a rainy day, melting these two into one very nice and joyful event.
Streets were full of people of all ages, most of them in masks, no matter if they were participating in the carnival or only greeting the participants and having fun. 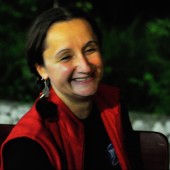 Methods to Turn on Home windows System Look after

Theatre of Dreams by Dariusz Klimczak